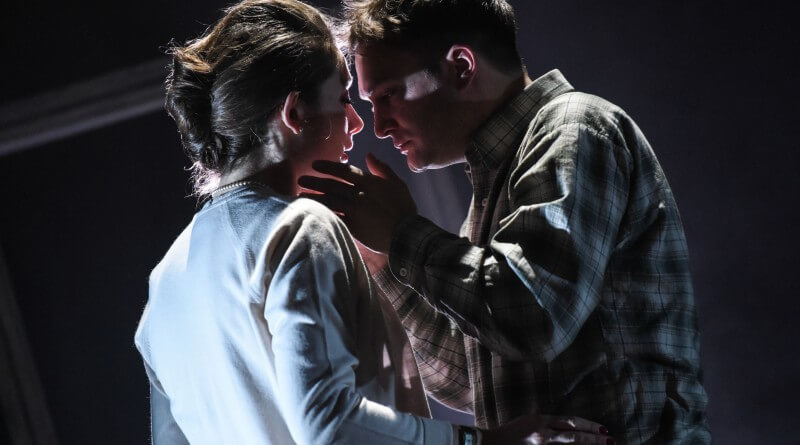 I struggled to write this review and ended up leaving it far longer than I should have, for the simple reason that this production of Look Back in Anger hit so close to home that it unnerved me.

It is a long time since a play has affected me on such a personal and emotional level, but this one did.  The pair of plays both did actually, but in different ways.  Jinny made me feel fondly nostalgic for a time in my own life where my ambitions exceeded my actions, but Look Back in Anger made me want to fight or flee.  There were times when I dearly wanted to leap up and punch the emotionally abusive husband on the stage and other points where I felt so discomfited and unnerved by the situation that I wanted to leave.  My own skin no longer felt comfortable and I did not feel safe.  I am, however, glad that I saw it through because it was an exceptionally good production.

This was an anniversary production of Look Back in Anger.  It is 60 years since it premièred at The Royal Court theatre in 1956 and it is oft cited that it helped to change the face of theatre and drama.  It is also largely autobiographical and written by the bitter abusive underachiever who has been dubbed an anti-hero by some.  I find no anti-hero here.  But the depiction of domestic tension, struggles of class within a relationship and the way in which women commonly react to such volatile situations is bang on the money and deeply disturbing, both in its recognisability and its normalcy, not just in 1950s Britain but in 21st century Britain still.  Look Back in Anger is often touted as representing a specific time in our history, because of the dissection of class aspirations and expectations and the societal rules that had yet to truly change in the period after the second world war.  It is a modern classic for a reason.  It was way ahead of its time and outside the traditions of theatre at the time.

Jimmy Porter is a modern monster.  And Jinny, featuring a 2016 version (descendant?) of Jimmy Porter brings the issues into the modern day.  The character is completely different – female and lacking of all the defecits that make Jimmy insufferable and horrifying.  This piece was commissioned from Jane Wainwright specifically to give a modern take for the anniversary.  It certainly addresses thwarted creative ambitions but I don’t think it addressed the other issues in Look Back in Anger.  I enjoyed it immensely and the talent of Joanna Simpkins is beguiling.  Jinny is a one woman show.  No-one else is on stage during this play.  Monologues can fail quite easily but this one did not.  She filled the stage and kept the energy high.

Patrick Knowles and Daisy Badger were unnervingly convincing as Jimmy and Helena, the fictional counterparts of writer John Osborne and actress Pamela Lane.

The sets were the same for both productions.  One flat, a mimicry of a flat on Green Lane in Derby where Pamela lived when they decided to end their marriage.  The claustrophobia of small flats for low incomes was keenly conveyed by the set design, as well as the performances.

They run at Derby Theatre until Wednesday 23rd (Jinny) and Saturday 26th (Look Back in Anger).  Ticket prices start at £9.50.  Be prepared for a hard time because it is not an easy watch.

Check out their trailer, released today:

One thought on “Review: Jinny and Look Back in Anger”