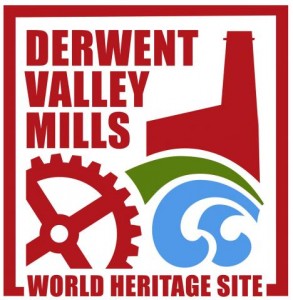 Last week Nplan4B hosted a talk, by Barry Joyce MBE and Adrian Farmer from the Derwent Valley Mills Partnership, to inform them about Outstanding Universal Value and how keeping our mills classified as a World Heritage Site requires community support, maintenance, renovation and effort within town planning to keep sightlines intact, so as to not spoil the view which is a part of being considered one of the most historically important sites in the world.  This was an essential talk, due to the need for the World Heritage Site to be central to all neighbourhood planning.

Belper and Cromford’s Derwent Valley Mills won World Heritage Status in 2001 and in the 15 years since Cromford has enjoyed a large scale renovation whilst in Belper we have watched the mill site decline and decay, which can eventually put the World Heritage Site at risk of losing its status.

The site was selected on the UNESCO criteria due to its key foundational role in starting the industrial revolution that transformed the world. These are the criteria and responses:

a) The site must exhibit an important interchange of human values, over a span of time or within a cultural area of the world, on developments in architecture or technology, monumental arts, town planning or landscape design.

“The Derwent Valley saw the birth of the factory system, when new types of building were erected to house the new technology for spinning cotton developed by Richard Arkwright”

b)  The site must be an outstanding example of a type of building or architectural or technological ensemble or landscape which illustrates a significant stage in human history.

“In the Derwent Valley for the first time there was large-scale industrial production in a hitherto rural landscape. The need to provide housing and other facilities for workers and managers resulted in the creation of an exceptional industrial landscape that has retained its qualities over two centuries.”

UNESCO (United Nations Educational, Scientific and Cultural Organization) was established out of the United Nations (1946) which was in turn formed from the League of Nations which was founded after WW1 (1921) from the concept of need for a world body to encourage peaceful co-existence.  UNESCO is the branch of the United Nations which attempts (without any enforceable power) to protect our heritage both natural and manmade.  UNESCO was initially inspired by the threat of the Aswan Dam to the Nubian temples in Egypt.  Over 20 ancient temples (dating as far back as the 15th century BCE) and numerous monuments were to be submerged and UNESCO came into being to save them.  With the exception of three temples, all were saved, albeit poorly, as they had to be cut up and moved to new sites.  This was made possible by the £28.5m (current value £596,277,342) raised from 50 countries during the 1959 campaign.

At the World Heritage Convention for the Protection of the World’s Cultural and Natural Heritage  in 1972, “Outstanding Universal Value” (OUV) was set as a criteria for inclusion on the World Heritage list.  All sites must be of value to the future.  Value is subjective and nowadays the local community is commonly used to determine whether the site has value or not.   Over time new categories have been added, such as “cultural landscapes”, where man has changed a natural landscape in a unique form that represents human intervention and is globally significant.  The current proposal of the Lake District due to “farming intervention” is a good example of what this means.

So if the site meets the criteria for OUV it must also meet certain criteria for authenticity and integrity and it must be demonstrated that there is adequate protection and management.  In our case, the Derwent Valley Mills Partnership takes on this role, with great difficulty in Belper due to mostly unreachable owners who seem unwilling to work with the community.

Industrial Heritage was new to World Heritage in the 1990s and UNESCO invited Britain to propose industrial sites by drawing up a list of 10 sites to be nominated in turn over 10 years.  Belper and Cromford were on a back up “tentative” list and it was a surprise to the area when the advisers to ICONOS phoned up for heritage plans.

Cromford had previously been rejected as “wreckage” but in 1979 the Arkwright Society bought the grade 2 listed site with an unsecured loan of £70,000 and began the slow road to renovation which is still underway.  The Belper site was still in use and was not in the state of decay that it now suffers.  Together the Arkwright and Strutt mills were recognised and it was acknowledged that England started the industrial revolution and it should be trumpeted globally and the sites preserved.

In 2001 the Cromford and Belper Mills were declared to have Outstanding Universal Value and to be worthy of status as a World Heritage Site.

Outstanding Universal Value isn’t a checklist.  Each generation has different values and focuses and what is considered valuable may change over time.  Yesterday’s pyramids and opulent lost faith are tomorrow’s council estates and preserved ideology. It is a subjective value judgement made by people listening to local people and experts who have enough passion for a place to mark its importance to the world. Value is relative.

This is the Statement of Outstanding Universal Value for our site:

“The Derwent valley, upstream from Derby on the southern edge of the Pennines, contains a series of 18th and 19th century cotton mills and an industrial landscape of high historical and technological significance.  It began with the construction of the Silk Mill in Derby in 1721 for the brothers John and Thomas Lombe, which housed machinery for throwing silk, based on an Italian design.  The scale, output and numbers of workers employed were without precedent.  however, it was not until Richard Arkwright constructed a water-powered spinning mill at Cromford in 1771, and a second, larger mill is 1776-77 that the “Arkwright System” was truly established.  The workers’ housing associated with this and the other mills are intact and span 24km of the Derwent valley from the edge of Matlock Bath in the north nearly to the centre of Derby in the south. The four principle industrial settlements of Cromford, Belper, Milford and Darley Abbey are srticulated by the river Derwent, the waters of which provided the power to drive the cotton mills.  Much of the landscape setting of the mills and the industrial communities, which was much admired in the 18th and 19th centuries, has survived.

In terms of industrial buildings the Derwent valley mills may be considered to be sui generis in the sense that they were the first of what was to become the model for factories throughout the world in subsequent centuries.

The cultural landscape of the Derwent valley was where the modern factory system was developed and established,. to accommodate the new technology for spinning cotton developed by Richard Arkwright and new processes for efficient production.

The insertion of industrial establishments into a rural landscape necessitated the construction of housing for the workers in the mills, and the resulting settlements created an exceptional industrial landscape.  The change from water to steam power in the 19th century moved the focus of industry elsewhere and thus the main attributes of this remarkable cultural landscape were arrested in time.”

This is the measure against which monitoring occurs.  If we wreck that landscape with bypasses and towering structures, if we neglect buildings to the point of great damage…then periodic reporting will pick these changes up and eventually a site which hasn’t been well preserved can make it on to the danger list, the worst case scenario being that it gets deleted from the World Heritage List.  Basically it’s a case of being responsible for whether this history is preserved or destroyed.  In itself this is a measure of how much people care about a site, although bureaucracy, business and politics all have a lot of power to interfere in ways which stop people from maintaining a site.

Part of the outstanding universal value is its list of Attributes, this identifies key pieces of the World Heritage Site; buildings, structures, views, access.  They help to define the site’s value to the global community.

Here are our Attributes, set with the Values which they relate to: 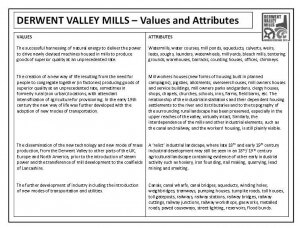 Included with these are 47 monitoring views – photos of what the town should look like from different points.  The site is surrounded by a Buffer Zone.  If we put wind turbines or high towers inside this buffer zone then the setting is corrupted and the sightlines are changed.  We spoil it.

This is the buffer zone.

When it comes to planning, the authorities do deal with heritage but outstanding universal value and the maintenance of the heritage site need to be considered more important than they are and the responses need to be more defined and considerate of the status of this area.

Amber Valley Borough Council’s own conservation officers deal with standard stuff but they refer matters which are within the World Heritage Site.  World Heritage only responds if they need to intervene, if attributes or viewpoints are affected by the proposals. Their responses usually include suggestions to lessen the impact of proposals, rather than standing wholly against them.

But World Heritage are not part of the UK planning system.  They have influence purely on good will and good arguments and cannot force the hands of the authorities in any way.  World Heritage UK would like the preservation of outstanding universal value to be included in neighbourhood plans and in local council plans, especially as the condition of the East Mill could eventually put us on the at risk register.  They would like to see heritage impact assessments as a requirement for all planning within the heritage site – not as a red card to development, but to encourage responsible development that maintains sightlines.

Our greatest threat at the moment is damage to the horseshoe weir which threatens to destabilise the entire weir, which would result in its destruction.  It needs urgent attention.  Neglect by owners, flooding, lack of funding and the difficulty in applying pressure to the owners all contribute to a position as dangerous as large construction within the buffer zone. 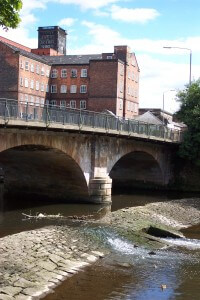 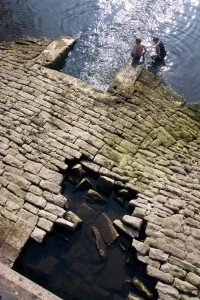 The question should always be, “how does this affect the outstanding universal value of the site?”

Nplan4B were asked to take all of this into consideration as they move forwards.

Adrian Farmer hoped that the talk had been helpful, “With the preparation of a Neighbourhood Plan for Belper now moving forward, it’s important that those involved have a proper understanding about what a World Heritage Site and its Outstanding Universal Value mean in planning terms. Hopefully, Barry and I have been able to get across the quite complex concepts involved in a way which will help with that work.”

If you think that there’s development, damage or a proposal which may put the OUV of the Site at risk, please contact Adrian Farmer at the Derwent Valley Mills Partnership: