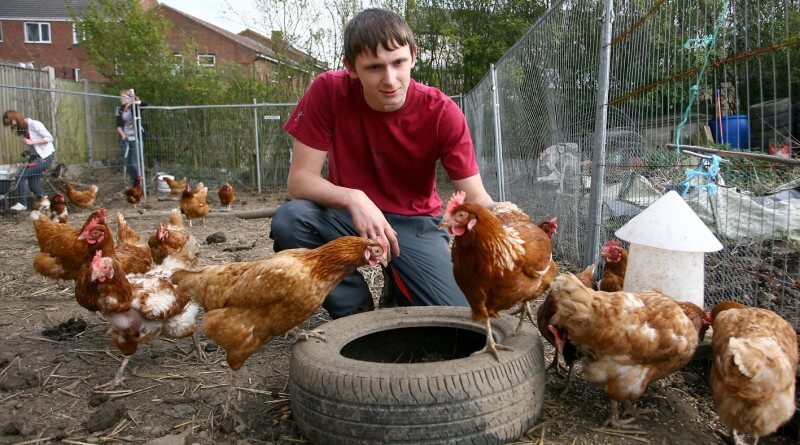 The Heage Scouts run an allotment, upon which they grow fruit and vegetables and breed chickens, selling the eggs and chickens on to fund the cost of the allotment and the food.  The bigger part of what they do is to teach young people in DE56 about sustainable living and give them skills to feed themselves and keep on doing it.  They are not trying to run a chicken empire.  They are not disturbing anybody.  They are actually setting a rather good example and doing exactly what the scouting movement commits to do – endow children with real world skills. They’ve been doing this for six years.

This project is now under threat from Ripley Town Council which owns the allotments and governs Heage, despite its different postcode. Heage Scouts objected on a new rule against cockerels to the town council, where the 1950 Allotment Act was cited, which permits hens but does not mention cockerels (or does not distinguish between hens and cockerels).  This permission is set out as an allotment renter’s right so long as they are not running a business, which the Heage Scouts are not. The new rule is one that has been introduced in many urban areas, although rarely in rural areas.  It has caused objections in all areas where it has been added because national law, bylaws and tenancy agreements all permit cockerels without that local council rule. After reviewing their decision, Ripley Town Council have chosen to enforce the new rule and the Scouts have one month to remove the cockerels from the allotment.

The Heage Scouts have been offered legal help by a local law firm who state that if there was a problem with the cockerels being on the allotment, then the process to stop it should have started six years ago, when the cockerels were introduced and that as it was not, any interpretation of the Allotment Act is now irrelevant due to precedent being set.

The Control of Pollution Act 1974 cannot be cited because there are no noise pollution complaints and the act only applies to large urban areas. In six years the Scouts have only received one noise complaint, which upon investigation was discovered to be caused by an adjacent property. There is no noise pollution to cite. They have taken great measures to ensure that they abide by noise regulations and keep the cockerels penned until the noise curfew ends at 7:30am.  There have never been any complaints about the project and, in fact, they draw the attention of interested children.

With the help of local lawyers, the Heage Scouts intend to challenge the council’s decision, which supports the landlord despite assurances from a Labour councillor that they would get to keep the cockerels.  The Scouts will use their month to fight the decision because without the cockerels they will not be able to make enough money to fund the continuation of the project and the education of DE56 children will suffer from this loss.

With no prohibition included in the tenancy agreement, it all rests on the details of a 70 year old Act that isn’t detailed enough for modern times and the legitimacy of enforcing the new rule.  Perhaps legal assistance will help the scouts to keep their cockerels.

(This article has been updated as some of the information offered to Nailed was inaccurate.)