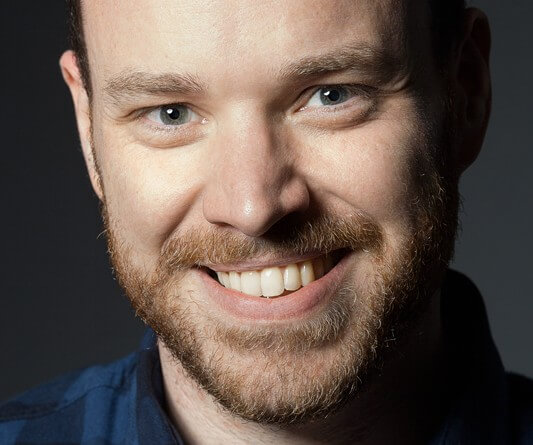 Stephen Lee Rees is an actor, director and writer who is making his mark on Belper theatre with his original plays. Last year saw performances of “LATE”, a play originally written in 2008. “FISH AND CHIPS” is due to be performed in February by local theatre company Marde Hen.

I began by asking Stephen where his ideas came from.

“I can get inspired by many things on a daily basis. Mostly boils down to people I see, how they interact or what it is they say. I’m a great fan of people watching. Often I marry those characters or situations up with a particular idea or concept. I originally wrote ‘Fish & Chips’ in 2007 whilst at University. The idea came to me whilst stacking shelves during a night shift for a popular supermarket and there was a middle-aged couple walking around in nightwear. They seemed comfortable together, laughing and bickering, you could tell they had good rapport. The woman asked her partner for a compliment as she said she looked frumpy and dowdy to which he didn’t delay in responding with ‘your eyesight still works’. Questions raised were then: Has the romance gone? Do the daily ‘put downs’ hurt? and Can the relationship survive the stresses and strains of a business – working side by side each day?”

Stephen decided to explore his passion for theatre at University. It was there he developed his writing.

“I normally write in one block, I get all of my information together, construct a plot outline – plot is the key!! and spend a day getting mad and making a mess until somehow the jigsaw is outlined, I then go away and stew on things for a bit before the actual writing process begins, this normally means drinking endless cups of tea and cleaning the house each time I begin a new scene. I write through the night as I find it easier to be less distracted by the outside world. I am a perfectionist when it comes to creating anything and often that gets in the way of me pushing things further.”

I asked Stephen if he described himself as self taught.

“Yes. Asbsolutely. I think even if you go to social groups or classes and have people analyse, edit or proof-read your work you are opening yourself to another level of learning that isn’t just ‘writing for dummies’ but learning a development skill. You learn by doing and making mistakes, understanding what works and what doesn’t but you need to ask yourself ‘why doesn’t it work?’ or even ‘why does it work?’ I read no end of books on how to write – the golden rules – and then no end of books on how to break the rules. Simply put, you’ve got to be open to change, open to critisism and those never ending re-writes. I studied work by Ibsen, Chekhov, contemperaries such as Ayckbourn,  Alan Bennett, Mike Leigh and the late innovative Sarah Kane. I think you can pick up a script and analyse it in many ways, you will always find something to learn from them.” 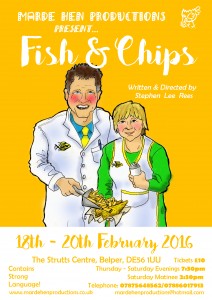 The finished script is just the beginning. In truth a play is never finished because a director and the actors put their interpretation on things.

Did Stephen agree that handing over the script at the first read is scary?

“ The moment that you hand the script over to the actors it becomes the most nerve-wracking experience. Often you think that the actors will raise their eyes away from the script and hand you the script back. Writing is such an isolated thing that you hide away for months working on a script and going slightly insane – lauging to yourself out loud in the middle of the night and you look around and no one is there to share that initial mad thought or funny line, rehearsing can be a slog – especially learning those lines but the pay off is the audiences’ reaction.”

“The next project I am involved in with Marde Hen Productions is a play called ‘Shafted’ by Jeannie Jordan which is due in June. I have two brand new plays; ‘Relatively Happy’ and ‘Open House’. I’m unsure which of the two plays will be my third outting after ‘Fish & Chips’ – due to me being a member of a procrastination group!”

FISH & CHIPS is on at Strutts Centre, Belper, DE56 1UU from Thursday 18th to Saturday 20th  February at 7:30pm with a Matinee on Saturday 2:30pm. Tickets are £10 and can be purchased online at www.ticketsource.co.uk/mardehenproductions or reserved at the door by contacting Marde Hen Productions on 07875648562.