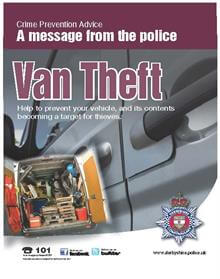 Van owners are being reminded about security after a number of thefts in the Chesterfield, Bolsover, North East Derbyshire and Amber Valley areas over the last week.

Drivers are advised to make sure that vehicles are locked, parked securely and that tools and valuables are removed.

The warning comes after police received reports of 13 vans which have been broken into across the area since Thursday, January 21. Seven of these vehicles have been targeted in the Amber Valley area, four in the Bolsover area, two in the Chesterfield area and one in the North East Derbyshire area.

The most recent incidents took place in Staveley and Mastin Moor sometime overnight between Monday, January 25 and Tuesday, January 26.

Three vans in the Belper area were broken into sometime overnight between Sunday, January 24 and Monday, January 25. Tools were stolen from the vans parked on Ashford Rise and Parkside.
In Heanor, the owner of a van parked on Breach Road was alerted by a neighbour about two men acting suspiciously around his Ford Transit at around 8.45pm on Sunday, January 24. The owner went out to check and noticed tools had been stolen from his van. It is believed the men got into a silver coloured car which drove off towards Langley Mill.

A neighbour also alerted a van owner to two men acting suspiciously near to a Citroen Relay van parked on a driveway off Rectory Gardens in Killamarsh at around 3.30am on Saturday, January 23. The van had been broken in to and a number of power tools had been taken.

In the Bolsover area, two vans were broken into and tools were stolen sometime overnight between Friday, January 22 and Saturday, January 23. A Ford Transit parked on Bentinck Road, Shuttlewood, and a Fiat Ducato parked on Chesnut Drive at Creswell were targeted.

Inspector Rob Bowns, of the Community Safety department for the area, said: “We are encouraging owners to take the necessary safety precautions from simply locking vehicles and removing valuables, to considering fitting and using a suitable alarm.

“Tools and other valuables can be expensive, and could also mean you are unable to work while waiting for them to be replaced. While it might seem inconvenient, removing these items and securing your vehicle might be worthwhile in the longer term.”

Anyone with information on these incidents should contact Derbyshire police on 101, quoting the crime reference number wherever possible, or call Crimestoppers anonymously on 0800 555 111.
For more information and advice on crime prevention you can also download a leaflet containing all relevant advice and more by clicking here: Van Theft