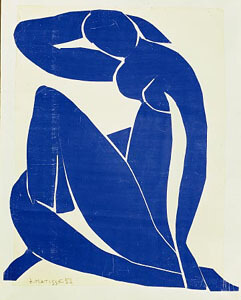 I was very excited about seeing this exhibition of Henri Matisse’s later work.  I was largely unfamiliar with that stage of his work and was looking forward to learning more about it because Matisse is an artist whom I find compelling and worthy of respect.

Matisse, in his later years, had abdominal cancer and following surgery was bound to his bed and a chair.  Painting and sculpture were suddenly physically impossible for him, so he found a new way to carry on.  With the help of his assistants he created immense cutouts from paper covered with gouache.  These cutouts went on to become impressive stained glass windows, architecture decor and art spectacle and most notably an art book, designed by Matisse himself.

I might as well have bought the book for all that this underthought and artistically ignorant exhibition achieved.  The entire exhibition was composed of print outs of artwork which existed on a much grander scale and there wasn’t a good excuse for it.  It was originally made with paper, despite later transition into print, glass and other mediums and there was scope within the space to place reproductions of some of it in a similar location (over a doorway) or to apply it to the space available.  Such exhibition would have conveyed the scale of these designs.  The tiny renderings of these important and imposing works made the work impotent when it need not have done.

Fewer inclusions on a grander scale would have done the artist and his work greater justice.  After viewing the exhibition, I explored the original settings of these works (in books) and realised just how overwhelmingly impressive the exhibition could have been had they put more thought into it.

Exhibitions at Derby Museum are free.  That’s about the right price for this particular exhibition.  Matisse once said “An artist must never be a prisoner of himself, prisoner of a style, prisoner of a reputation, prisoner of success…”  I’m afraid this artist was imprisoned by budget and effort and then summarily executed.