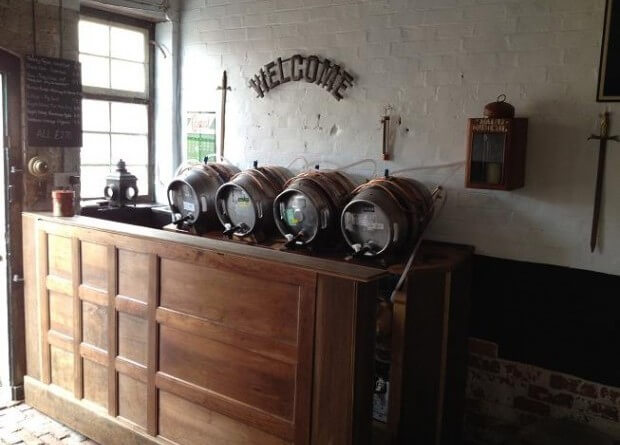 Steve Creswell of The Beehive on Peasehill, Ripley is the man behind a proposal to turn 29a Market Place, Belper into a micro pub with just 71 sq. m of floor space.

Planning permission has now been granted but a licence application is pending. If his plans proceed drinkers can expect a varied and interesting selection of real ales to be available.

The eight finalists for the Amber Valley CAMRA Pub of the Year award include the Black Bull’s Head at Openwoodgate, Hollybush at Makeney, Hunter Arms at Kilburn and Dead Poets at Holbrook. The branch received 214 nominations from 56 branch members and over 30 members have volunteered to be judges.  They will visit all of the shortlisted pubs at least once between now and Sunday 28th February.

Amber Valley CAMRA’s next meeting is at the George and Dragon, Bridge Street at 8.00 pm on Thursday 28th January.

The winner and runner up will be announced at Amber Valley CAMRA’s AGM at The Pear Tree, Ripley on Thursday 17th March 2016.

The Black Bulls Head (formerly named Bulls Head) was believed to have been re-built during Edwardian times 1901-1911, and belonged to Hanson’s of Kimberley and later Greene King. The current owners bought the pub four years ago and set about reverting back to a Real Ale house. Nicky and the team remodeled the bar, redecorated throughout and overhauled the cellar and installed new equipment. They made it warm and welcoming for the locals of Openwoodgate  and beyond, adding two roaring open fires, rich red walls and opening the bar up to make it easy working and a great atmosphere within the pub.

They also opened the Bedlam Bar at the rear of the pub to serve beers straight from the cask – pictured below. Since re-opening the Black Bull’s Head has been named Amber Valley Pub of the Year in 2013 and 2014 and was runner up to the Hollybush, Makeney, last year.

Chris and Alex Wilbraham have been running the Hollybush since they took over from long-term landlord and local legend, John Bilbie in 2011. Chris is a real local lad having arrived in Makeney with his parents some 25 years ago. John, sadly, passed away in November and is much missed by drinkers from far and wide who proudly declared the Hollybush to be their favourite pub.

John Bilbie bought the pub in a blind auction 1979. He decided to basically keep the place as it was and build a reputation based on quality, service and friendliness.

Chris and Alex’s dedication to ‘more of the same’ earned CAMRA’s Pub of the Year accolade for 2015.

Built in 1800 this pub was once more conventionally named the Cross Keys. As such it suffered from numerous changes of licensee, lack of investment and stripped out character. When it was bought by locals everything was stripped out to take it back to stone walls and flag floors. Simple but effective. It became the hub of the community and, in the early days, much of the furniture was provided by Holbrook locals.

It built an envious reputation but was eventually sold to Everards, the Leicestershire brewers. CAMRA’s What Pub web site – see: http://whatpub.com/ – notes:

“The pub has a delightful, old-worldly atmosphere and is very popular with locals. There is a delightful snug and the main bar has high-backed pews, low ceilings, stone-flagged floors, a real fire in the winter and inglenook. There is a welcoming, recently refurbished, conservatory area to the rear of the pub which is bright in summer and warm in winter.”

The first thing to note is the confusion over the name. Nowadays it is much referred to as the Hunters Arms whereas it is, more correctly, the Hunter Arms, being the Arms of the Hunter family.

“Built in 1879 and named after the owners of nearby Kilburn Hall the pub is a popular, friendly local serving good beer.

The pub was Amber Valley CAMRA’s Pub of the Year in 2011 and 2012 reflecting the work of Mark and Paula Showers who bought the closed-down pub in 2009 and set about transforming its fortunes.