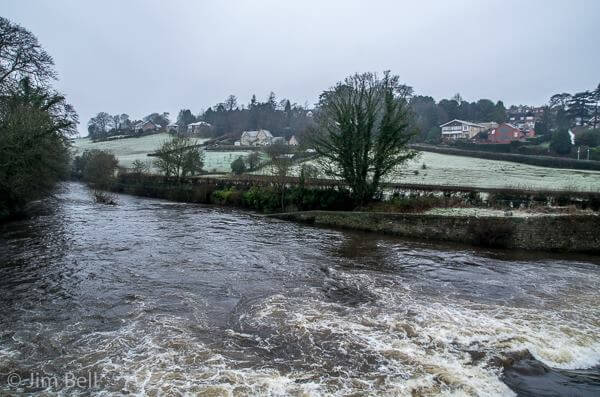 First it rained a little. Then the sun shone. Then it rained some more; and stopped again. Then, would you believe it, it began to rain again. The rain soaked into the hills and moors and ran into the streams. Soon the rivers were moving fast and then…it rained again, on and on, wet rain drizzling then dripping then pouring until the hills squidged and squelched and squirted with water underfoot and all the children wished they had webbed feet like ducks but had to make do with Wellington boots.

People wore crocks, then platform shoes, soon they were on stilts with two walking sticks, looking like four-legged spiders out for a stroll.

The rivers ran in the gulleys and valleys, they seeped into wetlands and swamped the plains. The rivers burst their banks and the water went everywhere.

Some people bought fisherman’s waders, others enrolled on rowing courses. They called in the fire brigade. They called in the army. There was a call for dingies and amphibious vehicles, for lifejackets and rubber rings and for paddles to get through the VERY deep puddles. A local boat enthusiast bemoaned the fact that the canals had mostly gone out of use and called for their resurrection. Dredgers were brought in to dig out the mud and weeds and builders and craftsmen to oil the locks and make the necessary repairs.

Children started boating to school. The local bus was now a ferry, having become amphibious in the months since the floods began when public transport was redesigned with fleets of bus-boats that could ride through the water.

Haulage went by canal. Shire horse breeding was re-introduced after a few giants were found at a rare breeds festival and were encouraged to successfully reproduce.

The fire brigade were issued with high viz wetsuits and could often be seen swimming about the town like a shoal of large goldfish. Everyone kept a float about their person, one of those small white rectangles of polystyrene that used to be standard issue in school swimming pools for children learning to swim, and adventure holidays became everyday activities.