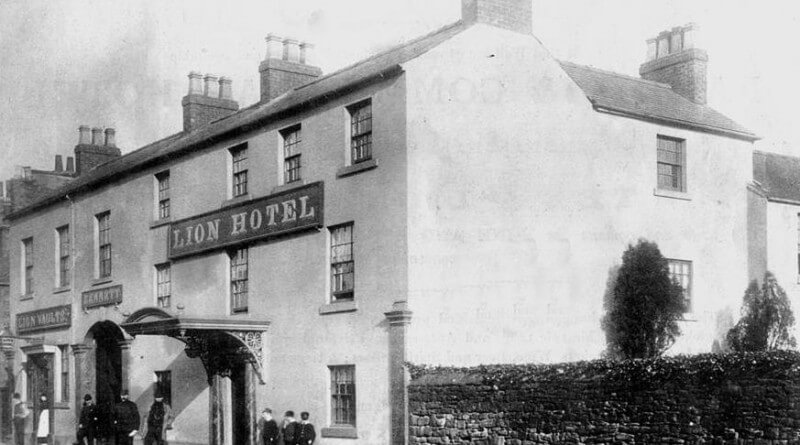 The Red Lion as a Coaching Inn

The original building date of the Red Lion is not known, but is believed to be several centuries old and is historically known for being a coaching house. It has changed considerably in style and size over that time, with the cellar areas being the oldest existing part.

In 1764 the Ashbourne and Openwood Turnpike passed through Belper and the Belper and Cromford Turnpike was authorised in 1817 to create a new road built between both towns. We now know this as the A6 through Matlock. Once opened, this provided a route for coaches and put Belper firmly on the coaching map for the first time.

When John Whittaker was proprietor of the Red Lion (1785 – 1824) it had a thatched roof and three stables, each accommodating a coach team and four horses. Ironically it was not until the 1830’s, when railways emerged as a threat, that coaches reached their peak.

The Lion was advertised for sale in 1824, stating that Mr. John Whittaker was retiring after being the proprietor for upwards of 40 years; it had two large parlours, five bedrooms, extensive cellars, a brew house, a coach house and stabling for 10 horses.

In 1829 the ‘Telegraph’ coach called at the Red Lion every day at one o’clock on its journey from Birmingham to Sheffield.

Two other coaches called The Lord Nelson and the Peveril of the Peak also stopped at the Red Lion such that at about half past one all three great stage coaches could be seen in Belper ‘bowling along, paintwork shining, brasswork gleaming and the horses hooves striking sparks from the road’. In 1834 the Lion the thatched roof was replaced.

Mr. Joseph Deauville was landlord from 1825 to the late 1830’s this was the busiest time for coaches with twelve coaches calling daily but when the railway was completed in 1840, all but one of the coaches ceased to run.

The Burial and body snatching of the licensee’s wife

The then landlady Mrs Deauville died on Wednesday 19th October 1825 about 1.30pm. She was apparently a fine looking woman and sister to German Rides wife. (see later the murder and suicide in Berkins Court)

A most distressing circumstance happened to Mrs Deauville’s body after burial (according to the diaries maintained by William Bamford, head clerk in the Counting House at the West Mill, who served Messrs. Strutt for nearly fifty years).

Mrs Deauville was buried on Monday Oct.24th 1825 in Duffield. Bamford continues ‘on Friday the 28th some inacrable (sic) wretches in the form of men stole her from the grave and had her doubled up in a hamper, her neck back and legs broken. When challenged whilst conveying her to Derby the villains set the hamper down and made off’.

Burglary at the Inn

Also according to Bamford’s diary In 1833 Mr T. Deaville at the Red Lion pulled down the Old Blacksmiths Shop and built a handsome brick building and made an arching over the road to his back yard. A little room at the back was built during the summer, whilst in December that year ‘Joe Whittaker was found hiding in the pantry of T Deauville’ Red Lion Inn’. They had a run for it and Deauville succeeded in capturing him. He was taken to the lock-up’.

The Lion as a meeting place for the landed gentry

Bamford’s records also recall that on Jan 7th 1833 ‘A dinner was given to the members of the Southern Division of the County of Derby, at the house of Joseph Deauville, host of the Red Lion Inn Belper, dinner on table at four o’clock. The company was numerous and among them were John Strutt Esq., Chairman (and he behaved extremely well), Lord Waterpark, The Hon George Vernon, Joseph Strutt, Edward Strutt, Jedediah Strutt, Anthony Radford Strutt and Mr Mathew Gisborne. Mr Ingle was Vice Chairman.

Great confusion prevailed about serving the dinner, but it is the first time such a thing has been held in Belper, and it was expected to be the case, on future occasions an improvement must be attempted. The dinner was well cooked and great plenty of it. The Hon. George Vernon found Venison and Lord Waterpark, Game’.

The Lion as a Coroners Court

In 1844 a murder and suicide occurred in Berkins Court a group of houses still standing directly opposite The Lion Inn. A Coroners court held at the Inn heard that a husband bludgeoned his unfaithful wife to death in one of the cottages before slitting his own throat. The Ride family possibly related to Red Lion Landlady Mrs Deaville, resided in Berkins Court and was involved in this murder. Berkins Court was built Circa 1796 by the Strutts for renting out to their primarily female workforce. They were 3 or 4 storey dwellings built back to back with a one room footprint and steep almost ladder like staircase. The court consisted of Lion Terrace as seen currently from the Lion Inn directly opposite, Croft Cottages now demolished and replaced with a garage and shop and a similar group of houses now known as Chevin View to the rear. All of these houses are Grade 2 Listed but only one is still an original back to back.

The Lion and its links with the Railway

Mr. Joseph Deauville was landlord from 1825 to the late 1830’s this was the busiest time for coaches with twelve coaches calling daily but when the railway was completed in 1840, all but one of the coaches ceased.

Following the development of the railways and lack of trade resulting from the discontinuance of stage coaches, from 1852 a horse drawn omnibus from the Red Lion attended all trains to and from the original Belper station which was on Goods Road. The Lion Hotel proprietor had exclusive rights to run this omnibus.

In 1835 George Stevenson was engaged to develop a rail route from Derby to Leeds. The original route was from a tunnelling under Hopping Hill at Milford and following the east side of the Derwent, along the flood plain below Belper before crossing Bridge St (ironically) near the George and Dragon Coaching House, in order to cross Long Row behind the school, and onwards travelling north.

The original route of the railway as described above was strongly contested by Messrs Strutt, and others including the Mayor and MP for Derby. The revised route completely by-passed Milford with a tunnel but must have devastated Belper for years during the construction of the cutting and several bridges which hide the railway out of sight as it travelled to the Northern industrial regions of Lancashire and Yorkshire, and providing a link to the South and London via Derby. The Derby Mercury in 1840 stated that ‘the retaining wall at the cutting in Belper must excite the admiration and astonishment of all’. Further in the same year they quote that William Burn of the Angel Commercial Inn stated that ‘in consequence of stoppage of coaches’ offers for sale ‘Twenty Superior Coach Horses.’

In 2014 work by Network Rail in preparation for electrification has revealed that the stone lining is a decorative facing and not a structural retaining wall and there are voids behind!! Hard to believe!! The original Italianate Belper Railway Station built about 1842, was situated at the south end of town on Goods Rd.

It was not moved until 1878 when the new Station was built not far behind the Lion Hotel and close to the other Belper Coaching House now known as The Railway Pub King St Belper. The old Railway station siding on Goods Rd was used for the marshalling of horses acquired by the Army and destined for use on the continent during World War 1.

The Lion as a Posting House

From the late 1830’s until 1862 it was occupied by John Charles Taylor who had previously been a druggist, seedsman, snuff and cigar dealer and grocer. By 1862 the building was extended over the site of “old Sim’s shoeing shop” according to Mr Willott and had a second floor and eleven bedrooms.

In 1855 it was a posting house and in 1862 the Inland Revenue held their meetings there. From 1863 until 1868 Mr.& Mrs. George Leeham ran the Lion and then Samuel Tetley took over until his death in 1888. Mr. G. Beardsley then took over the Lion Hotel and left 16th November 1920 to take the Old Neptune he was followed by Mr. Wood.

Later in the 20th Century at the side of the Inn a butchers shop existed and at its rear a slaughter house was built with the cattle market being held in the area now occupied by Field Lane car park.

The Lion Hotel at present

In 2014 the present owners Messrs John and Jonny Crooks refurbished the previously ailing Lion Pub reinstating it as Hotel and Restaurant status. They have successfully reclaimed land adjacent finding remnants of the slaughter house in the overgrown plot that is to be landscaped as part of the rear outside garden space.

The latest development is the growth of live musical entertainment currently every Sunday evening in the form of an open mic and alternately a ‘live in concert’ session in the Arkwright room. During the summer months artists sing in the original courtyard using the over-looking balcony for a stage. The Lion continues its community spirit by supporting opportunities for local artists to perform at these events and other special occasions during the year. These opportunities are to be extended throughout 2016 to include regular monthly evening shows on a Friday with the continuing emphasis on free admission and support for local musicians.

The Lion Hotel has enjoyed many changes over the centuries and the current quality service and hospitality is the culmination of efforts by the present owners to ensure that the Lion Hotel continues to play its role as a social hub for Belper people and visitors alike!

3 thoughts on “The History of The Lion Hotel”