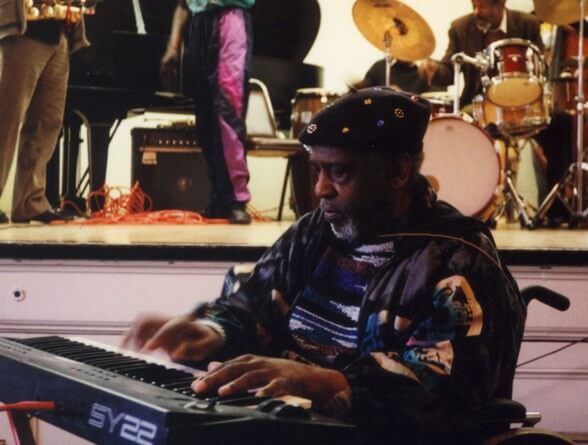 I hesitate to write a review of an event that is based in Nottingham but for some things you just have to make an exception and, after all, thanks to East Midland trains Nottingham is only a 30 minute train ride away.

Sun Ra was a jazz musician and band leader whose music was inspired by a self- made mythology that embodied Afrofuturism and his own belief that he was, in actuality, an astral traveller born on Saturn.

The Nottingham Contemporary Art Gallery Exhibition celebrates Sun Ra as a poet, philosopher, artist and filmmaker as well as a jazz musician. The exhibition contains a rare screening of Sun Ra’s film “Space is the Place” (on a loop), recordings of interviews with Sun Ra, film of the Sun Ra Arkestra playing live, a chance to read Sun Ra’s poems, and archive material – including letters and contracts which show the earthbound practicalities of keeping a big band together and on the road for nearly 40 years. The Exhibition’s central attraction is a series of 32 headphones each linked to one of Sun Ra’s many albums and recordings. Sun Ra’s repertoire is vast. There are hundreds of recordings out there and for those new to his work this can be daunting and off- putting. Sun Ra’s albums can consist of: solo piano pieces; raging-synthesizer cataclysmic noise storms; tribal chanting and drumming; considered big band arrangements; tight ensemble playing; shifting, shimmering soundscapes; early adoptions of electronic (often self made) instruments; and sometimes all of these in one performance. The exhibition offers a rare chance to listen to Sun Ra’s performances in the round and thereby reveals a jazz composer, arranger and showman of high order.

The exhibition also explores Sun Ra’s philosophy. A complex mix of gnosticism, Egyptian mythology (he studied and could read Egyptian hieroglyphics) cosmology and black radicalism. Sun Ra genuinely believed he was a traveller from Saturn put on earth to bring a message to set people free; a sort of cosmic prophet. Through the medium of his Arkestra, Sun Ra hoped to channel cosmic radiations and the harmonies of the universe to enable his followers to travel the spaceways to freedom and infinity.

“In some far off place

Many light years in space

And wait for you”

The mythology is compelling and is a large part of how Sun Ra kept a band of excellent musicians together for so long, including Marshall Allen who now leads and tours the Arkestra; Sun Ra left Earth in 1993. For those of us who are still Earthbound Sun Ra and his Arkestra are justly celebrated for experimental and pioneering jazz compositions traceable to the big jazz band traditions of Duke Ellington and Fletcher Henderson.

Sun Ra and the Arkestra deserve more attention, and if you like jazz, are a fan of Sun Ra or are just curious, you should take this opportunity to visit the exhibition before it closes on the 31st of December.