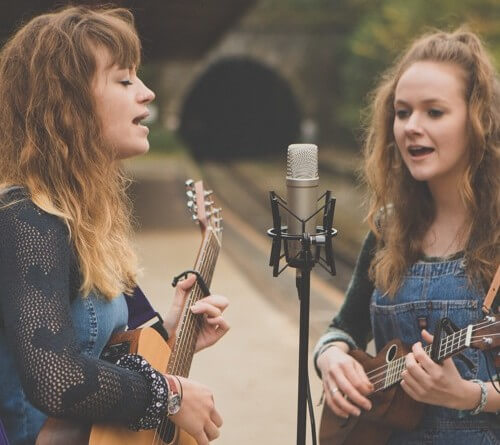 The Sunflower Thieves, or locally known artists Amy Illingworth and Lily Sturt-Bolshaw from Belper, have collaborated with contemporary composer and musician James Oldrini in association with the Belper Arts Festival to release charity single LOVE IS.

The words to LOVE IS were adapted from Biblica’s Corinthians by writer and festival organiser George Gunby. It was set to music by Oldrini earlier in the year for the purpose of being included in the Belper Arts Easter production The Resurrection 2015. It was recorded by local musicians Amy & Lily.

“The reaction to LOVE IS surprised and pleased us,” said James Oldrini. “Soon after we recorded the demo I instantly thought that this would be a releasable track. The words are beautiful and work in a commercial sense too. I thought it would be a shame to write something so meaningful and for it to sit on the shelf after the one performance. It’s the perfect track to release near Christmas and help raise awareness and money for a good cause.”

“We sat down with James to discuss re-recording the track for release and to decide which charity we’d all like to support.” said Amy. “It was unanimous that we wanted to support a local charity. Aquabox, based in Derbyshire, helps desperate people around the world in need of clean drinking water and essential aid – it’s something that we all really want to get involved in and support.”

Lily went on to say, “We’re really excited about this release. Not only can we help raise awareness of the fantastic work Aquabox is doing, we also get to unveil our new name Sunflower Thieves with this release. We plan to move our music careers forward under this name and release our first EP next year.”

Aquabox take water filters and emergency supplies around the world to support families and communities in need. Launched in 1992 by the Rotary Club of Wirkswirth the charity, with support from Rotary International, was one of the first box aid schemes in the country. Having continued to grow year on year the charity has now shipped over 100,000 boxes to over 50 countries worldwide.

“On January 2nd I am putting a pre-album launch night for my debut album Enlighten on at Number 28, Belper Market Place.” James adds, “It’s an intimate gig with my quartet playing a few tracks from the new album. The Sunflower Thieves will also play a set and also Gong’s Dave Sturt will join us on the night to play a few tracks from his new solo album. We intend to do a special performance of LOVE IS to finish. It’s only £5 on entry and that money will also go to support Aquabox. Limited spaces are available, so please contact me via my webpage if you’d like a space reserving.”

The single LOVE IS is available to download from www.sunflowerthieves.co.uk please leave a donation to Aquabox.