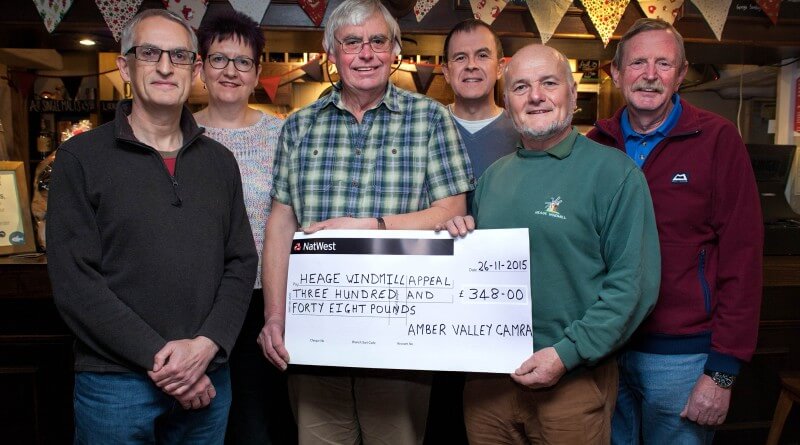 Back in August, when HWS Trustee Tony Cooper – himself a CAMRA member – contacted AV CAMRA’s chair, Chris Rogers, and organiser, Phil Marshall, for permission to do some fundraising for the ‘Trouble at Mill Appeal’ at their popular annual Beer Festival in Belper, he wasn’t expecting the TAMA appeal to be adopted as the Festival’s nominated ‘good cause’.

As a result of this a total collection of £348 in cash was raised and a cheque for this amount was presented to Tony, on behalf of the Windmill, at AV CAMRA’s Branch meeting at the Spanker, Nether Heage on Thursday 26 November .

‘AV CAMRA really took the mill’s appeal on board’ said Tony, ‘As well as our display desk, we had a whole page in the free festival programme where our appeal was explained, and the CAMRA cash desk volunteers were collecting cash from departing drinkers throughout the 4 day festival’

As reported earlier in Nailed the first phase of repair work has begun, focusing on restoring the windmill’s sails. The sails are now removed and are currently being refurbished by HWS volunteers.