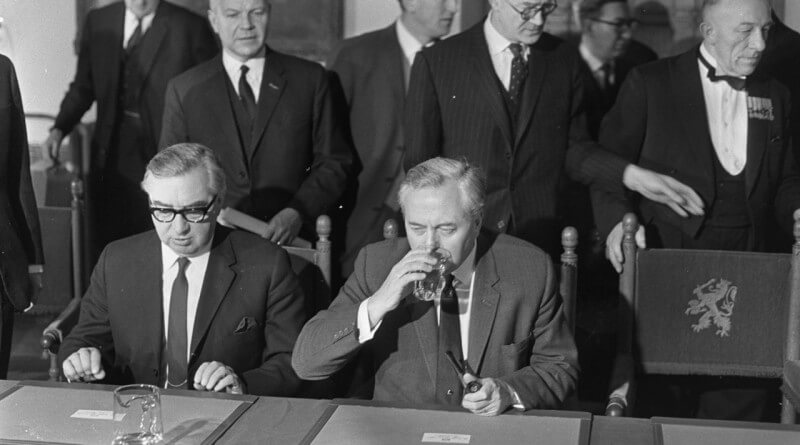 Jeremy Corbyn’s election as leader of the Labour Party recalls the time when another Labour leadership contest electrified the country – and had particular relevance for Belper.

Mention the name George Brown to anyone who was of voting age in the sixties and their response might involve rolled eyes and a wry smile. They might mention tantrums, public drunkenness, a memorable television double act with Robin Day and a habit of asking ‘God’ to forgive those who disagreed with him. Some might even recall the memorable phrase ‘tired and emotional’, coined to describe Brown’s usual state. In an age of black and white television, Brown was the most colourful figure on the political scene, a fixture in the news, on television, and even in the gossip columns. Yet today, thirty years after his death, Brown is virtually forgotten. Why?

George Brown was born in Lambeth in 1914, to a working-class, socialist family. His working life got off to a rough start when he was dismissed by his first employer for encouraging colleagues to join a union. But the unions were to be his salvation: he was quick to gain employment with the TGWU, who sponsored his campaign as Labour candidate for Belper in 1945; and in the Labour landslide of that year, he was elected with a 9,000 majority.

Brown gained rapid promotions within the Ministries of Agriculture and Works. He made many friends and some significant enemies,. His volcanic temper might have been fuelled by resentment of better-educated peers. Despite his high natural intelligence, a university education was beyond the reach of someone of his background. This sense of being an early school-leaver among Oxbridge graduates never left him. There was to be more time for introspection after Labour lost the 1951 General Election.

In Opposition, Brown established himself as a national figure. When Hugh Gaitskell became Labour leader in 1955, Brown was in congenial company. The two men worked well together and Brown’s political future seemed secure; but everything was thrown into doubt by Gaitskell’s sudden death in 1963.

By now Deputy Leader, Brown felt he had a strong claim to be Gaitskell’s successor – but there were other hats in the ring. Both Harold Wilson and James Callaghan had significant parliamentary followings and Callaghan’s role in the contest split the right-wing vote, leading to Wilson’s victory.

Emotionally, Brown never recovered from this setback, the first serious one of his career. Yet the reasons for his defeat were obvious: aside from his habit of ‘plain-speaking’, there was also his fondness for the bottle, widely known amongst colleagues but not as yet to the public. This was to change when, feeling sorry for himself over the defeat, he vanished on a ‘binge trip’ to Scotland, leaving no forwarding address or means of contacting him. Labour MPs decided they had made the right choice in opting for the sensible Wilson over the unreliable Brown. When he appeared on a televised tribute to the assassinated President Kennedy, he was so visibly intoxicated that the Labour Party had to issue an apology for his appearance. 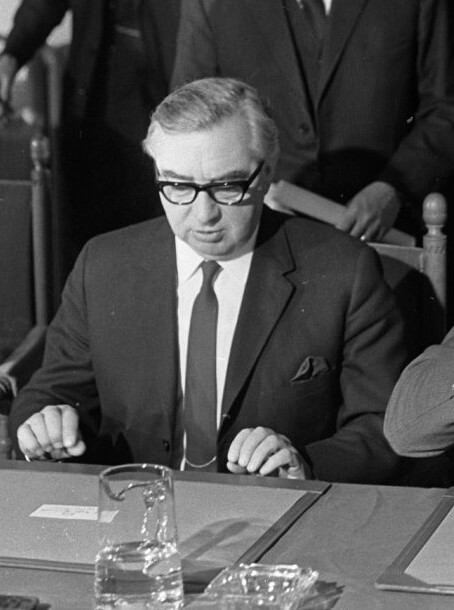 Labour was anxious about the ‘Brown effect’ as it began its 1964 General Election campaign, but Brown showed himself to be a tireless trouper. While Harold Wilson concentrated on major speeches, Brown barnstormed the country, happy to engage with hecklers and generally winning voters over to Labour’s cause. At his count in Belper, Brown was interviewed by Robin Day: although tired (and no doubt emotional) he was in good humour, addressing Day as ‘Brother’ in the manner of a TUC delegate. When Labour narrowly won the Election, Brown became Deputy Prime Minister and Secretary of State in the newly-created Department of Economic Affairs.

The five years of Labour government from 1964 to 1970 were amongst the most turbulent in recent history: Britain was transformed, but the transition was marked by economic upheaval and social unrest. Brown didn’t attempt to hide his contempt for Wilson’s ‘presidential’ style of government.

Wary of his volatile personality, Wilson was careful to keep on the right side of his Deputy: so, when Brown threatened to resign in 1966 over a series of economic measures that invalidated his own work, Wilson promoted him to the Foreign Office, a job Brown had long coveted. The appointment raise eyebrows but he surprised everyone by proving a capable Foreign Secretary, building bridges with the Americans over Vietnam and supporting the government’s doomed attempt to enter the Common Market.

But even as Brown was riding high in public, his power-base was shrinking. Belper had changed during the sixties, becoming less a rural community than a dormitory for the Derby overspill. The owner-occupiers of the new estates that had emerged to cater for this influx overwhelmingly favoured the Conservatives. In the General Election of June 1970, Brown lost the seat by over 2,000 votes to the Conservative Geoffrey Stewart Smith.

In a combative concession speech, Brown implied that he would contest Belper again. Instead, he accepted a peerage and some lucrative directorships in the City.

Brown faded from the public eye during the 1970s. When he made the headlines, it was for losing his driving licence, or fronting a short-lived tv advertising campaign for P&O Ferries. In 1976, he left the Labour Party over the second Wilson government’s subservience to the unions; but the impact of his announcement was undermined when he was photographed being hauled out of the gutter by press reporters, having been ‘tired and emotional’ in public yet again. in 1979, he endorsed Margaret Thatcher’s Conservative Party in the General Election of that year but in 1981, he joined other Labour defectors to form the Social Democratic Alliance.

The last four years of Brown’s life were unsettled. In 1982, he surprised close friends by leaving his wife of over forty years for his much younger secretary (Lady George- Brown was also surprised – the first she knew of it was when he vanished from the family home two days after Christmas). The new couple made their home in Truro, Cornwall but their relationship was marked by rows and separations. Brown’s drinking had caught up with him and he became gravely ill with cirrhosis of the liver. He died in June 1985, one of his last acts being a deathbed conversion to the Roman Catholic Church.

Early in his career, Brown stated that his life revolved around ‘three central points’: his wife, the Labour Party and the Church of England. Obituarists weren’t slow to note that he’d abandoned all three. But his story represents one of extraordinary achievement – even today, it’s almost unheard of for a person from a working-class background to reach the top in politics; and despite his demons, he maintained a role in public life for a quarter of a century. Nowadays, it would be impossible for someone like Brown to get past a selection committee; and it’s difficult to imagine any politician behaving as he did under today’s more intense media scrutiny.

The Belper constituency was abolished in 1974 and it wasn’t until the election of Edwina Currie in 1983 that the county was to put a similarly colourful figure on the national stage….