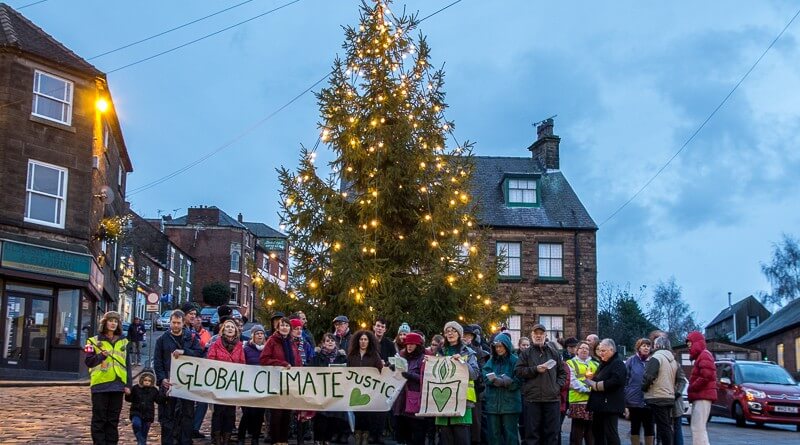 Nearly 150 world leaders arrived in Paris on Sunday to begin the COP:21 talks on climate change; a potentially historic set of international talks on targets and global action to combat the manmade alterations to climate which have decimated animal species, melted the ice caps, threatened the gulf stream and are set to imperil more human lives and the very way in which we live.  If the talks fail, as all previous talks have done, scientists estimate that we will become locked in to a global trajectory which will ensure a future of more frequent flooding, increased droughts, rising sea levels, starvation, water shortages, extreme weather (including devastating hurricanes and tsunamis) and a multitude of then unstoppable catastrophic events.  So the pressure to succeed is intense, especially as British government has just announced that we will fail to meet our targets and parliament has ended support for renewable energy projects in favour of fracking gas and nuclear energy.

Recent studies show that the initial effects of manmade climate change are already hitting us, from extreme heatwaves in Australia to sea rise floods in America, and 2015 looks to have been the hottest year within measured global temperatures since 2014, which was a new global record.  There’s no ignoring it now.

Hundreds of thousands of people have taken to the streets across the globe to demand action and let the world leaders know that making changes to minimise the damage to our environment is of paramount importance to the people that they represent.  Fifty thousand took to the streets in London, forty five thousand in Sydney, Australia.  In Kenya they marched across the equator, in Chile they marched across a glacier and in Paris (where the protest was banned due to security concerns following the Daesh attacks) thousands of shoes were left where the protesters would have stood.  There were nearly six hundred thousand reported marching for one action group alone and Belper took part in the Take To The Street campaign, our part being organised by Inner Transition, a new part of Transition Belper.

Ironically, the weather battered the plans that had been set but Belper people stood firm against the storms throughout the afternoon, and as our Deputy Mayor, Gary Spendlove said, “It is good to see so many staunch people protecting not only our town but our planet.” 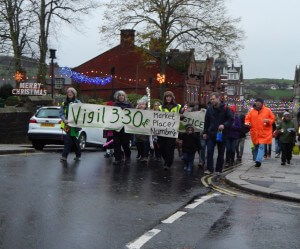 At around 3:30pm, people marched up King Street, singing, banging drums and bearing banners to advertise the vigil.  They stood in the rain until after 7pm on Sunday evening singing, reciting poetry, dancing and imploring the world leaders to take heed of the people and care for the future of all.

Our Mayor Dan Booth, Deputy Mayor Gary Spendlove, Transition Belper, Inner Transition, the Green Party, Craft Activism, Amber Valley Solidarity and Nailed were all in attendance in the Market Place and at No. 28 Cafe, which once again helped the community to be loud and present in its caring. 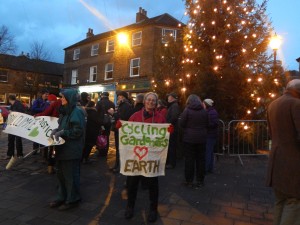 Freelance community gardener, Karen Fry, cycled from Nottingham to attend because Belper was the closest location participating in the global action.  She heard about the event through social media and having been involved in climate change action for 25 years, felt that it was important to be here, especially because of the effort involved in getting here. “Coming on the train didn’t seem good enough.” 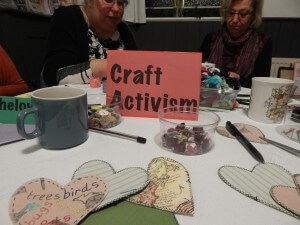 Regular yarn bombers, the (as yet unnamed) craft activists of Belper followed up on their long list of craft activism (Woollen Woods, Fashion Revolution Day, East Midlands Hunger Summit) with their #fortheloveof hashtag campaign to get people to wear their hearts on their sleeves.  Attracting many participants, the craft activists helped people to sew words of their love for the world onto cloth hearts which they could pin to their sleeves. They will be visible again in the Memorial Gardens for the Christmas Fair.

Both the Black Swan and Fresh Bites joined in by feeding the protesters with (quite honestly fantastic) roast potatoes and pizza, and town councillors turned up and joined a 2 minute silence and joyous singing (in the rain) to, in the words of Mayor Dan Booth, “Fully support what they are doing.” because as his Deputy Mr. Spendlove stated, “Issues transcend party politics.” 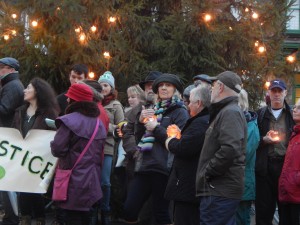 There were four silences to reflect on the state of the world and the effects that we humans have upon the quality of life for every human, animal and environment on the planet and there were even invocations of Earth goddesses in a circle prayer song. 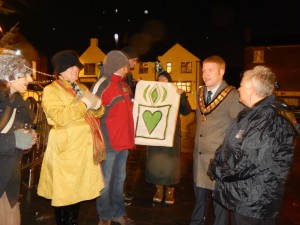 All in all, this vigil brought every age group from toddlers to pensioners, from council to protest groups, a variety of faiths, pubs, pizzerias, cafes and businesspeople out onto Belper’s streets to make a difference.  It was well organised, joyous, important and hopefully, when the photographs taken today are shown on large screens to those 150 world leaders as they walk in to the COP:21 talks, effective.

The faces of the concerned in Belper will be seen, through the facilitation of Avaaz, by David Cameron, Barack Obama, Francois Hollande and Ban Ki-moon.  Hopefully, the demonstrations across the world will make a difference, with Belper playing its part.