Everyone who regularly visits Belper will know this familiar smiling face. This is Belper’s Big Issue seller, Simona. But what’s her story? How did she start selling ‘The Big Issue’, and what are her hopes for the future, for herself and for her family?

Simona often tells me how much she likes Belper people. She enjoys the regular chats, and these help her get through a long day on her feet. People will ask how she is, and find ways to cheer her up and encourage her to stay positive.

But I wanted to find out more; so we sat down over a drink before she headed back to her home in Birmingham.

I am surprised to find that Simona is only 20 years old and first came to the UK from Romania a few years ago.

Prospects for work in her small home town were non-existent, and it was her idea to travel to the UK, persuading her mother to come with her. It was a three-day journey by coach.

What she was leaving behind was great hardship. Her father had been a street cleaner, but became ill and now lives in an institution, though only in his fifties. Simona’s face saddens as she tells me that he doesn’t know who she is when she tries to speak to him on the telephone.

I ask her what her memories of Romania are, apart from the awful hardships, and she tells me she has happy memories of playing with her sister in the tiny garden of her childhood home.

I ask her about her mother – perhaps she has found work? But no – Simona tells me her mother struggles with severe spinal problems, and has to go to hospital every day to receive a pain-killing injection. In spite of this, she still looks after Simona’s baby daughter while she is out selling the magazine. Her son has just started school.

“He is English, he was born here,” she says proudly and, although at home they speak Romanian, she tells me she hopes her son will teach her more English as he learns at school, and perhaps this will help her to get a job. I ask about her own English – where did she learn?

“From talking to customers,” she says – I show my surprise – “you haven’t had any English lessons?” No, she tells me she has learned entirely from those of us who chat with her every day! 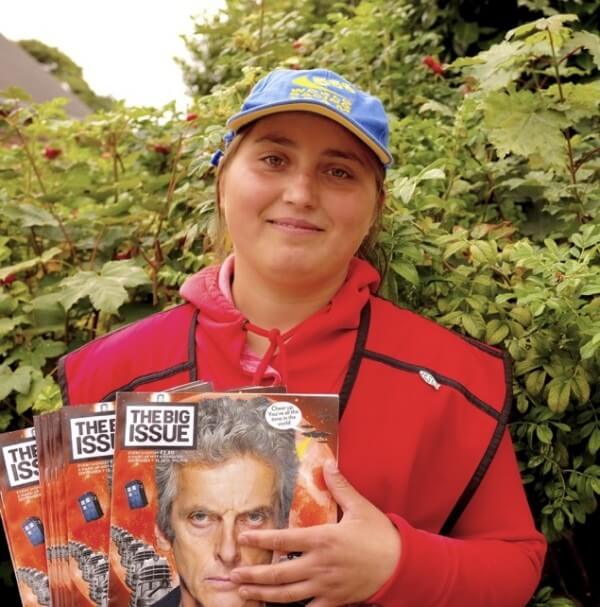 Simona decided to give ‘The Big Issue’ a try after talking to another seller about how it worked.

As some of you will know, she has been selling ‘The Big Issue’ in Belper for around two years. At first it was only occasional, but now she aims to be here three days per week. I asked her why she doesn’t sell in Birmingham, – she explains there are already too many sellers there.

“How do you get supplies of the magazines?”

“They are delivered to me from Nottingham, I can decide how many to buy from the supplier, I sell each one for a small profit.”

But on average, Simona only sells 20 copies per week, barely enough to cover her train fare. She usually finishes her day by going into the shop to see what food she can afford to buy with the money she has made.

“Often I can buy almost nothing – potatoes, maybe some bread…kind people sometimes give me sweets for the children.”

I ask her about her hopes for the future. Like most parents, her hopes revolve around her children, and she tells me that she wants her children to get a good education and be able to find work.

Her faith is clearly very strong, and she attends a church in Birmingham, where she receives occasional help and support.

“What do you enjoy doing most?” I ask.

“Going to the park with my children,” she smiles.